Cooperatively-owned renewable energy is a fairly simple model. But we find some people still don’t understand it. Since I am spending a lot of time reading and telling stories to my three year old I decided to explain how the model works in the form of a children’s story. To simplify things I have changed the amounts by a factor of 1000 but the ratios would still be the same.

Once upon a time Sue, Tim, Jessica, and Pete pooled their money together and bough a solar system for $100. Each of them put in $25.

One day Jill noticed that they had a solar energy system. Jill said, “I have always wanted to put a solar panel on the new house I am building but I can’t afford the $100 upfront cost. Can I use your panel and just pay for the electricity that it generates?”

Sue, Tim, Jessica and Pete thought about it and decided that Jill could do that. They told her that they would charge her $4 per year for the electricity it generated.
Jill said, “Well that is a little bit more than I am paying now for electricity but I will consider it.”

Then Jill found out that the City government was requiring her to meet certain energy efficiency targets with her new home. Her builder told her it was going to cost $200 for these efficiently upgrades. But if she installed the solar energy system from Sue, Tim, Jessica and Peter, she could meet the energy target.

Jill decided that spending a few extra cents each year for the electricity from the solar energy system was worth it.

Jill was happy because she didn’t have to spend the $200 for the other efficiency upgrades.

Sue, Tim, Jessica and Pete were happy because they were getting $1 each per year. And that is more money than they would have received had they put their $25 in the bank.

So they all lived happily ever after. 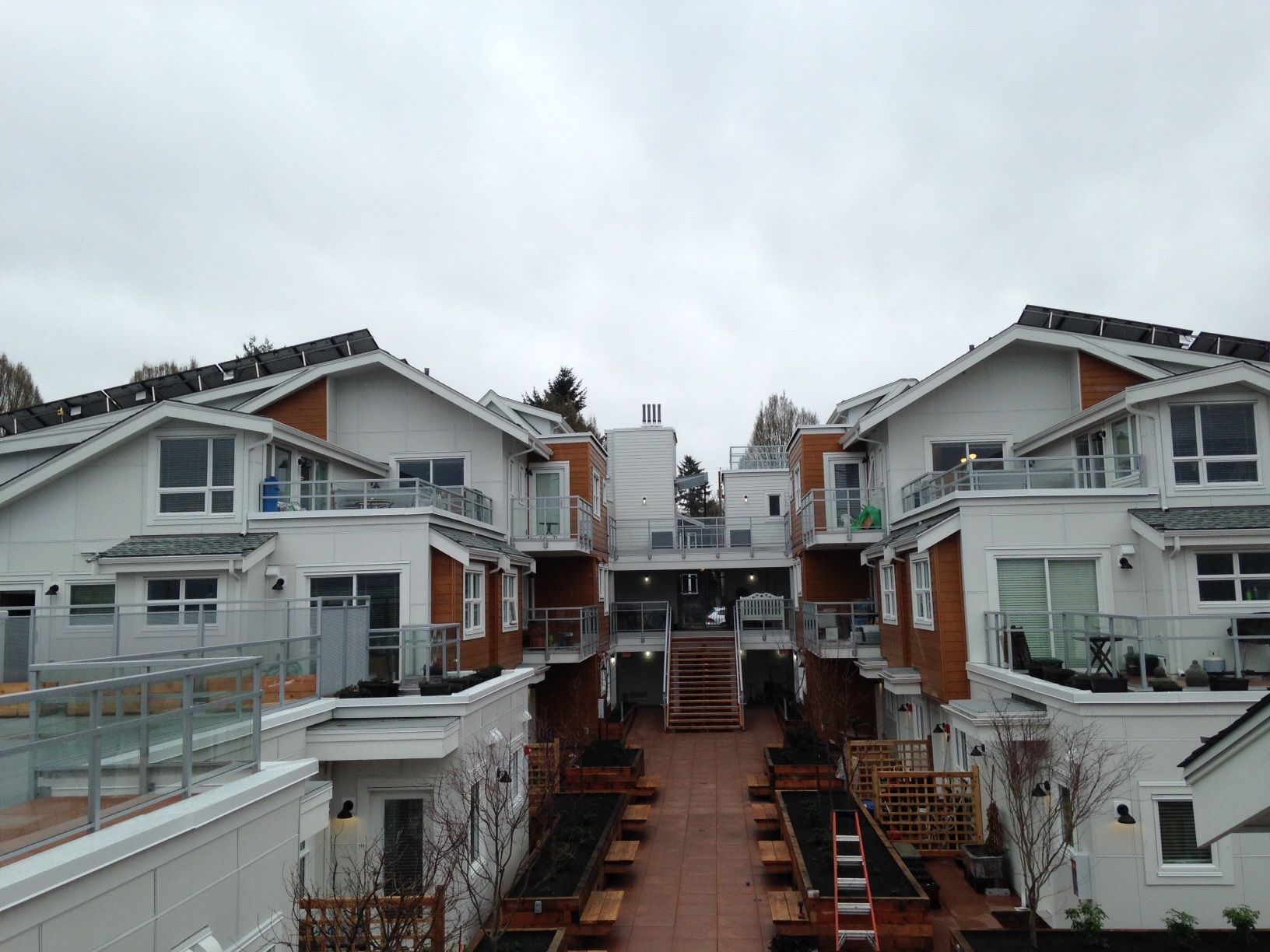 Solshare Energy is hosting a Community Solar Project Showcase and Tour on March 30th, 2016 to present BC’s first community owned solar energy project producing clean energy. The 23 kW photovoltaic plant, recently installed in East Vancouver at Vancouver Cohousing, a multi-family residential complex, officially began production recently. Bullfrog Power provided construction financing for the project and has been a great supporter of the community solar project. The project is one of the first leasing projects under BC Hydro’s Net Metering Program.

The launch event is open to the public and will include brief remarks by Vancouver City Councillor Andrea Reimer, free hot drinks, snacks, door prizes, mini tours of the community solar project and more!

RSVP to the event here>>

Solshare Energy is BC’s first cooperatively owned community solar energy project. Solshare’s plan is to own a portfolio of renewable energy installations throughout BC that will engage BC residents and offer financial, social, and environmental returns. Solshare Energy is a project of Vancouver Renewable Energy Co-operative (VREC).

If you have any questions about the event, please contact:

Solshare Energy, BC’s first community owned solar project, has just completed another round of financing and now has a total of $69,000 in share capital from investors.

The funds raised will be used to complete the purchase of a 23 kW photovoltaic plant recently installed in East Vancouver as well as other start-up costs. The photovoltaic system is installed on a multi-family residential complex and is expected to officially begin production later this week. The revenue from selling the electricity from the system will be used to pay dividends to investors. Dividends have already been paid out to investors who bought shares in earlier financing rounds.

Solshare Energy plans to add additional solar plants located throughout BC to its portfolio and will be seeking new investors as these plants come online.To receive updates on investing in Solshare fill out our contact form.

Solshare Energy has announced it has paid its first dividend of $0.41 per share. This is an annualized return of 3.3%.

“We are excited to offer BC residents an investment in local renewable energy projects that offers an ongoing income stream.” said Solshare CEO Rob Baxter. “We have seen considerable interest for a truly local ethical investment alternative.”

Solshare Energy is also currently accepting another round of investments that will help finance its first installation.

Solshare Energy is BC’s first cooperatively owned community solar energy project. Solshare’s plan is to own a portfolio of renewable energy installations throughout BC that will engage BC residents and offer financial, social, and environmental returns. Solshare first installation was a 23kW system installed in east Vancouver. Solshare Energy is a project of Vancouver Renewable Energy Co-operative (VREC).

Shareholders would receive dividends in return for “ethical investment”.

We have begun installation of our first project. Crew from Vancouver Renewable Energy (VREC) started installing the roof mounts for the solar modules at a site in Vancouver.

The 23 kW photovoltaic system is being installed on Vancouver Cedar Cottage Co-housing. The complex is currently under construction so the system will not be brought fully online until later in the year when the electrical systems are in place.

Solshare Energy is running a series on the solar revolution all over the world to help BC residents better understand why solar power is coming to a roof near you, why it’s viable here and how you can take advantage of its growth.  But what exactly are renewable and non-renewable” sources and why are they viable today? In this blog we’ll look at various energy sources, some we already use in our daily lives that can be both renewable and non-renewable. Let’s take a look at some of the different varieties.

Fossil fuels: the dominant source of energy in the world, formed by the sun over millions of years. Fossil fuels are a hydrocarbon that sit below the earth’s surface that are eventually converted into crude, natural gas and coal.

Wind: generated in part from the sun by heating the air which changes air pressure and generates power using wind turbines both on land and sea.

Hydropower: the dominant energy source for electricity in British Columbia created by dams that use the force of water.

Tidal: a form of hydropower that uses the gravitational effect from the moon and sun creating motion by the water and is often used in the ocean.

Geothermal: generated by the earth’s heat much like geysers, volcanoes and hot springs.

Solar: is derived from the sun’s heat and light. It’s also the only source of energy that produces every other energy we currently use. Solar power is International Energy Agency said solar power could be the number one source of electricity on earth by 2050. (Source).

You may have noticed that the common thread among these forms of energy is they all depend on the sun’s power. Harnessing the sun’s power to generate electricity is nothing new. But the solar revolution that’s occurring all over the world is happening for one major reason: the price of solar panel has dropped drastically in thirty-years making the technology accessible and profitable.

In the next issue in our series on the solar revolution we’ll talk about how solar power works and why it’s reliable and viable for BC residents today.

Solshare Energy is a community-owned solar energy project in BC.   If you would like more information on Solshare Energy please enter your details in the form below.

Rob Baxter, co-Founder of SolShare Energy discusses the most commonly asked questions about renewable energy in BC, how solar power can benefit anyone and why he does what he does.

What Is SolShare and How Does It Work?

SolShare energy is a crowd-based equity funding project that allows investors to buy shares in a company that’s going to own commercial solar energy projects in BC.  From those projects, investors receive dividends based on those shares.

Who Are The Potential Investors?

SolShare is for BC residents who are concerned about climate change who care about green jobs and about the expansion of pipelines and other fossil fuel infrastructure projects.  They’re already looking to invest or even divest.  They’re home owners and most certainly are looking or a long-term growth in fast-growing industries.

The initial round is a minimum of $2,000 for their investment.  After the first round, the amount to invest will be much lower – as little as $50 will get you in the door as a SolShare investor.

Where Will The First Solshare  Project Be Installed In BC?

The first project in Vancouver is a co-housing project.  A group of people came together to build a jointly-owned apartment building as a co-housing and all of the owners agreed to install the solar energy on their building and lease the equipment.  So SolShare receives payments from them and those payments go towards the dividends that investors receive.

Each project will have a launch event where people can come and see the projects and any project so they can see and understand where their money is being invested.  Most projects will be in Vancouver but there will be others in BC as well.

When Is This Happening?

Construction will be finished by July it will be starting to receive revenues in July.  The first dividend will probably be paid out in October, 2015.

Why Are You Involved In Renewable Energy?  What’s Your ‘Why’?

SolShare is a way to accelerate that deployment.  It’s a way to get larger systems installed and larger buildings and help the deployment of renewable energy happen faster.  It’s also a way for more people to get involved in renewable energy.  Part of the problem right now is if you want to install a solar energy system you need to own a building like a house or a commercial building.

You also need to have upfront capital around $7,000-8,000 which is out of reach for most people.  With SolShare you don’t have that much capital to own solar energy systems and receive some of the benefits from them.  In many ways, solar is more democratic and accessible than other investment options out there.

What Changes Have You Seen When You Started In Renewable Energy?

The most significant one is that the price of solar has dropped has come down by about 85%.  The interest in solar energy has grown significantly.  Our revenues have grown on average by 20% a year over the past 10 years.  Since the price of solar panels have gone down the rate of installation has grown faster than that because we’re installing more for the same amount of money.

The type of technology has changed as well.  Since the beginning we’ve installed photovoltaic and solar electric energy.  The price of natural gas came down but so did photovoltaics or solar panels which are produced largely in China.

In Your Opinion How Would You Want BC To Accelerate The Process Of Solar Deployment?

The biggest benefit would be for BC to create a feed-in tariff program similar to what we have in Ontario or what they had in Germany or other places in Europe where utilities pay a premium for green energy which incentivizes more people to install it.  BC currently pays

Why Are You So Passionate About Renewable Energy And Transitioning Away From Fossil Fuels?

I’ve been trying to reduce ecological footprint in a lot of areas of my life.  I’ve made changes to my transportation choices by cycling everywhere.  I first became interested in solar when I explored installing panels on my own roof.  I looked around in Vancouver around to see if anyone else was doing it and there really wasn’t much going on with solar energy so I got together with some other people and set up a company, Vancouver Renewable Energy Co-Operative (VREC) that started to deploy grid-tie solar energy systems in Vancouver.

Most importantly, I have a two-year-old daughter and I’d like to leave the world a better place for her than when I came into it.